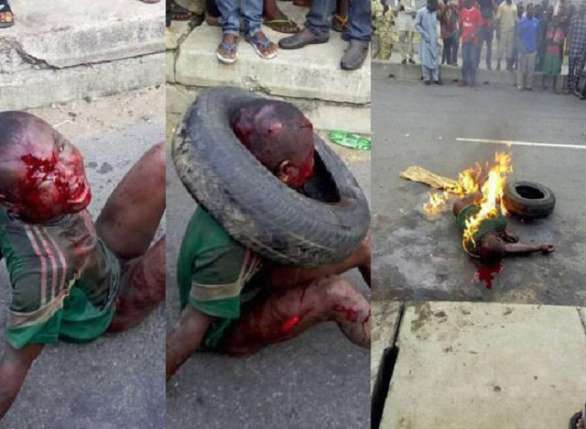 Too often people become embittered, act on impulse and take justice in their own hands without taking into cognizance whether the gravity of the offences truly justify the punishment meted out on the suspect particularly when jungle justice is being wrongly administered against the suspect or even criminals who had been caught red handed.

In any sane society like ours where there is law, where there are security agents and law enforcement bodies such as Policemen, Mobile Police, Civil Defence, SARS, CID among others whose sole responsibilities are to maintain law and order, protect lives and properties as well as handle several other criminal offence cases which by Federal mandate falls within their jurisdictions are being boycotted and jungle justice is now being used at will by the citizens to the point of snuffing life out of a 7 year old boy, a juvenile suspect who had allegedly attempted to steal some Garri (Cassava Flakes) in Lagos today, then we still have a long way to go as a nation! My grouse  is why do we often resort to jungle justice against petty thieves? When ironically, those who have looted, and still looting our treasury walk freely amongst us, flaunting their ill-got wealth in our faces? Life is indeed a paradox! The point is, our societal conscience has been so degenerated and seared to the extent that we now vent out our anger at one another instead of those who dragged us into this monumental mess.

When I stumbled on this Jungle Justice story, at first, I had thought it was just some sort of stunt by a blogger who was only trying to build traffic of readers. But while reading it, my wife had called in to share similar story with me in which she confirmed to be true. And While I was still pondering on the possibility of a 7 year old boy being killed in such a cruel manner for just attempting to steal common Garri in Nigeria. A USA based friend also, sent out a post on his Facebook wall to express his disappointment on such barbaric act perpetrated in Nigeria in this 21st Century.

Since then, I had been troubled within me and series of questions have been popping up in my mind which we should all begin to reason along. Questions such as what if this boy was actually famished and probably needed some food? And when he couldn’t find anyone he tried his luck by going for the Garri?. What if he was an Orphan? What if he was one of the mistreated children without parental or Guidance attention?

Do they know that many homes can no longer afford three square meals a day in this recession time in the country? Are they aware that hunger and starvatiom are gradually creeping into the country? Most families suffer shortage of food, thereby causing them to skip meals. I know many would argue that, that should not justify his stealing but he was only a kid!

Moreover, looking at the age of the suspect in question being a 7 year old boy means he was extremely too young to understand the magnitude of such offence and he only needed to be either taken to his parent for punishment or at worst handed over to the police for appropriate action and not be killed and burned like Sallah ram.

Having considered all these, we need some soul searching and quiz one another where is our conscience as a society? Has it been so BADLY degenerated or seared that we completely forget laws still exist? Do we really understand that Violence Against Persons Prohibition Act (VAPP Act) is really in existence in this country? It states that “no Nigerian citizen or even non Nigerian deserves to be lynched in such a gruesome manner regardless of what he or she had stolen or done”.

It is even quite disheartening that the passers-by, and probably those living within that same community would just be at the scene cheering on the mobsters during the dastardly act.

I therefore, call on concerned authorities to take necessary actions by investigating the incident and see that these perpetrators be brought to book as soon as possible this would serve as deterent to others because when societal conscience is denegrated and seared anarchy holds sway!