ONE, NMA PROTEST FOR IMPROVED HEALTHCARE SYSTEM IN NIGERIA 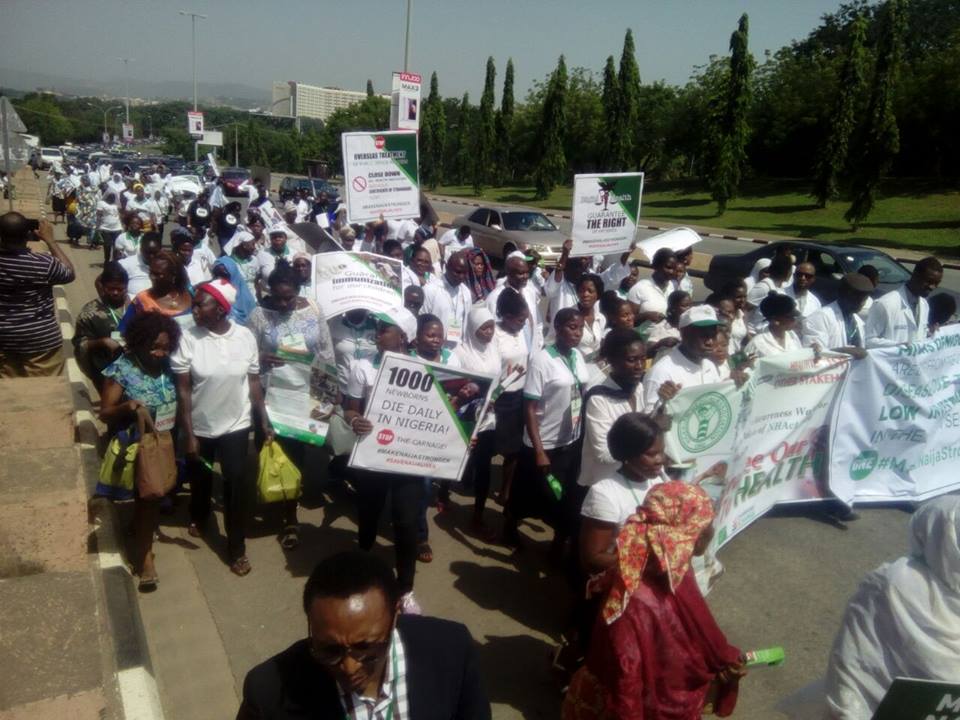 ONE, a campaigning and advocacy organisation taking action to end extreme poverty and diseases in Africa in collaboration with Nigerian Medical Association (NMA) and other Civil Society Organisations such as DEAN Initiative, Women Wing among others had called on Presidential Buhari and other policy makers in Nigeria to make investment in health sector a priority particular in the 2017 Budget so as to avert the spread of communicable and other terminal diseases in the country.

This call was made in a peaceful protest made by these organisations to the Presidential Villa in Abuja yesterday. Although the protesters were prevented from gaining entrance into the Villa by the Security Operatives such as mobile policemen and armed military men stationed to abort the protest halfway, despite the blockade they were able to pass their messages through media coverage present at the protest.

According to Edwin Ikhuoria, Country Representative for ONE Campaign, while addressing the media said  “it is imperative to urge Mr President to make better decisions by making investment in the health sector one of Nigeria’s priorities in our 2017 Budget”

“More than 1,000 children die in Nigeria every day as a result of lack of adequate healthcare facilities within their communities” he affirmed.

Edwin further added that if President Buhari could at least make 1% of the 2017 Budget for healthcare, it would go a long way in reducing the poverty level at the grassroots.

Mr Henry, the Spokesperson for the NMA however expressed his displeasure at the state of healthcare services delivery in the Country, “at present, there are no modern medical equipment for efficient healthcare service delivery in the country, hence top government officials and well off Nigerians seek medical attention and check ups overseas, this is an indication of failed health sector in Nigeria”.

“We will not give up in our demand for improved and better health care delivery for the Nigerians and just like Bring Back Our Girls Group did, we will persist in this protest until the right attention is giving to the health sector” he cried.

Henry promised that in the next couple of weeks they will return with another protest if President Buhari does not respond to their demands.