How prepared are we for fire disasters? 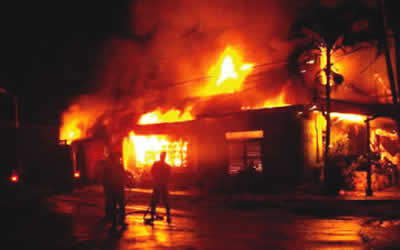 A couple of months ago, there was a video that went viral, about the escapade of a Nollywood actor, Ani Iyoho, who was nearly killed on set in a movie stunt gone awry. The clip of the accident was a ridiculous but true mirror image representing the cinematographic charade going on side by side with real filmmaking in our film industry.

Although it was later denied by some industry commentators as a contrived publicity stunt to attract viewership for the mediocre film and its largely unknown cast and crew, the damage was already done. It was a failed project on two fronts. For one, if it were actually a publicity stunt, then it betrayed the shallowness of the Nollywood strategists involved. Not only was it cheap, it was crass art. Real advert practitioners and even public relations interns cannot be caught planning such an imbecilic copy.

And, if it were actually a recording of an accident on a Nollywood set, then it is a mishap made in hell, and has nailed Nigeria’s lackadaisical attitude to environmental safety.

In the clip, we were shown a movie location along a shrub-hedged road. It was probably an accident scene where the actor/stunt would catch fire and then fall down after a short run. He would then be doused after the cameras cut. But as we watch the actor, he seems to have miscalculated the distance and timeframe within which his safety garment would prevent the fire on his body from harming him.

So, he begins to flail in distress from right to left, and finally careens off the screen into the roadside. The shout of “extinguisher, extinguisher!” could be heard over the din of panicking movie crew.

My concern was why a particular crew member was screaming for extinguisher. Wasn’t an extinguisher – and in fact a safety crew – supposed to be right there beside the stuntman, as a matter of procedure?

Actually, if there were no extinguisher, or a safety crew on the set, then the producers of that movie should be arrested, publicity stunt or not. Nollywood is now a global player and there are basic global best practices it must abide by.

Every day, the abuse we mete out on our environment is made obvious, and nobody asks questions. In saner climes, the environmental impacts of film productions are checked and crosschecked at the pre-production stage. This is why at the end of certain movies, you see such disclaimers as “No animals or forest reserves were damaged or harmed during the course of making this movie!”

Some time ago, a movie production was cancelled in China when some environmental activists protested that it was going to upset the ecosystem on the chosen location.

In any case, a deeper look at the Nollywood fire incident also reveals our society’s general unpreparedness as it concerns fire disasters. Have we wondered why is it that in some certain seasons, and some certain locations in Nigeria, fire disasters become the order of the day, year in and year out, without abating? In more rustic zones, we see these hazards play out as bush burning during pre-planting and post-planting seasons.

I write this article because we are just at the threshold of yet another dry season. The hot season, followed by harmattan is danger time for habitats like Lagos. Reports of fire incidents become rampant as atmospheric particles become dry and charged.

A few weeks ago, a police barracks in the Obalande area of the state was razed by fire. The report stated that fire fighters were late in coming, so, when they finally arrived, the residents out of anger denied them access to the smoldering barracks. Indeed, I saw an interview of one of the residents, who gleefully talked about how they refused the firemen entrance.

As I read that report, I could not help wondering whether the residents had any basic fire-fighting equipment in their flats as a first defence line against fire emergency. Just as citizens equip their houses with primary security gadgets, it is high time they also equipped their homes with primary firefighting instruments like carbon dioxide extinguishers.

In most cases, little fires would have been doused and bigger infernos prevented if there was a handy fire extinguisher. Fire fighters must not take the blame for our fundamental failures. We should therefore be fire-conscious, just as we have learnt to be security conscious. Obviously, losses through fire disasters are more egregious than through robberies.

I also found out that institutional neglect, and criminal collusion between regulators and some citizens, has led to many deaths. Ironically, when these preventable disasters happen, we neither learn, nor question the institutions whose job it is to prevent them. Nobody asks questions, and it is business as usual. Here, ignorance and the disaster that feeds into it establish an enduring vicious circle.

Truth be told, the job of the Fire Service in the country is more in ensuring the national entrenchment of fire prevention protocols than for rushing noisily into fire emergency scenes. The impact of their productivity should also be measured in this wise.

This piece of document – which is supposed to be backed by authentic and virile procedures as it is done in other serious nations – is now for sale in Nigeria. In fact, its value is as high as the frame on which it is hung from one office to the other. Anyway, who blames the regulators, when vehicle road worthiness and emissions certificates can be obtained by proxy just by simply dictating one’s car number and doling out the required naira to the happy cash officer?

But let it be known that lives are being lost daily because the firemen and indeed every Nigerian have not carried out the duty for which they are paid monthly wages and for which we are compatriots in a potentially great nation.

At the beginning of this year, three lives were lost in Jabi district, Abuja, when a three storey building housing corporate offices was hit by what would have been a minor fire incident. In what can now be seen as avoidable deaths, the three people jumped off to their death on the hard concrete from the third floor of their offices when they saw smoke rapidly billowing up to where they were.

The sad situation was that the building had only one exit door on the ground floor; and the fire started on that singular exit door! There was no other route of escape for all the people upstairs at the time of the incident. Instructively, fire safety directive states clearly that any building of up to a flat must have an alternate exit door.

As incredible as it seems, this Abuja building housed a daily newspaper firm, that never saw the need to question the environmental safety status of its rented office building. So, here was a three storey building, housing many offices, but had only one exit door on the ground floor. As they say, only in Naija!

Greg Odogwu is a prolific columnist with Punch Newspaper. Contact him via gregodogwu@yahoo.com 08063601665