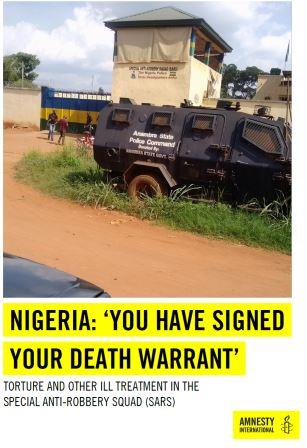 Amnesty International Nigeria has recommended speedy passage of the Anti-torture Bill in line with United Nations Convention at the official launching of 2016 Report titled ”YOU HAVE SIGNED YOUR DEATH WARRANT”. The launching which took place on 22nd September in Abuja, after several months of Amnesty researches on torture in Nigeria.  The report became imperative in exposing the dehumanizing activities and use of torture by the Special Anti-Robbery Squad (SARS).

Mr. Makmid Kamara, the Country Director, Amnesty International Nigeria, in his opening remarks described the importance of the press briefing/Report launching which is the 2016 report with its focus on the use of torture by the SARS during interrogation of accused persons. “It has been revealed through our various researches that SARS officers often involved in the torture and other ill treatment of detainees  and are rarely held to account and in some cases are transferred to another location to avoid punishment, in such torture sessions, many accused have lost their lives, he alluded.

SOME RECOMMENDATIONS BY THE AMNESTY INTERNATIONAL

READ THE EXTRACT FROM THE REPORT

“Despite numerous petitions from Nigerian and international human rights organizations to the police authorities, there is no indication that any SARS police officers have been punished specifically for torturing detainees. Nevertheless, in interviews with Amnesty International, police authorities insisted that they do punish police officers who are found to have violated the rights of detainees in their custody.  Amnesty International has however not seen any evidence supporting this claim. The internal police mechanisms in Nigeria are weak. The CLEEN Foundation, a Nigerian NGO that has conducted research into policing, has stated that the Nigerian Police Force (NPF) “lacks an effective database on complaints and discipline management” and that the police complaint management system is “generally inaccessible, ineffective, and does not enjoy the confidence of members of the public.”

The internal accountability mechanism within the police includes the X Squad, the orderly room trial and the Complaint Response Unit. While conducting research for this report, Amnesty International was unable to identify a single police officer in SARS who is being investigated or prosecuted for torture. Officials of the Complaint Response Unit (CRU) in Abuja told Amnesty International in June 2016 that no police officer from any SARS unit in Nigeria is under investigation by the CRU for allegations of torture. When Amnesty International visited SARS station in Awkuzu in June 2016, the head of the station confirmed that the former Officer in Charge, who was the subject of several petitions from human rights organizations, had been transferred to another station.

While the police authorities are keen to showcase when disciplinary sanctions are imposed on officers, Amnesty International is not aware of any such sanctions for acts of torture. Several Nigerian human rights organizations stated that officers accused of torture are merely transferred to other stations. For example, in 2014 Amnesty International documented several cases of torture by officers at SARS Awkuzu, Anambra state, and shared its findings with the police authorities, calling for investigation into the cases. Amnesty International also received copies of petitions from human rights organizations and lawyers calling for investigations into certain police officers in SARS Awkuzu.

When Amnesty International researchers visited the station in June 2016, they were informed that most of the former officers had been transferred to other stations. In public, senior police officers often talk about ongoing reforms aimed at improving human rights standards within the force. In practice, however, any actions taken by the Nigeria Police Force have failed to adequately address the use of torture and other forms of ill-treatment in the interrogation of suspects. Far from taking effective measures to end the practice, the police authorities have allowed frequent torture and other ill-treatment to be carried out with impunity. Human rights defenders are not allowed access to SARS cells or to detainees. Even the National Human Rights Commission, a body authorized by an act of parliament to visit places of detention in Nigeria, is often denied access to SARS stations.

Moreover, suspected perpetrators of torture are hardly brought to justice, and instead continue to commit their crimes with impunity. The apparent lack of accountability breeds and perpetuates impunity by SARS officers, creating an environment in which detainees are at risk of torture and other ill-treatment. Amnesty International believes that this is partly because many officers have bribed their way into SARS units. They may therefore feel unaccountable to the very superiors they have bribed and who, in many cases, are the ones to investigate the alleged wrongdoing.

The Special Anti-Robbery Squad (SARS), a special branch of the Nigeria police created to fight violent crime, is responsible for widespread torture and other cruel, inhuman or degrading treatment or punishment (other ill-treatment) of detainees in their custody. Amnesty International’s research shows that detainees, both men and women, are subjected to various methods of torture and ill- treatment in order to extract information and “confessions”. Such methods include severe beating, hanging, starvation, shooting in the legs, mock executions and threats of execution.