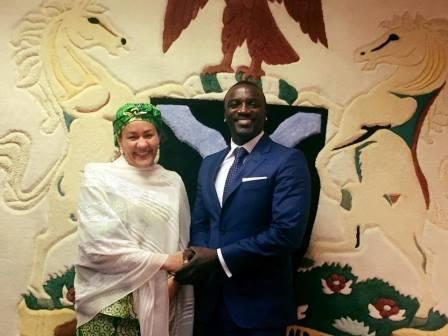 Last week’s visit of the Senegalese-American music icon, Akon, to the Minister of Environment, Amina Mohammed, in New York City in the USA, strikes a remarkable resonance with the visit of America’s permanent representative to the United Nations, Samantha Power, to Nigeria. The two events took place around the same time.

It was reported that the Senegalese singer made the visit to discuss the Great Green Wall project, a cross-country strategy set to battle desertification in the Sahel and sub-Saharan African regions. It was designed to run through 11 countries from Senegal to Djibouti. In Nigeria, it will run through 11 states from Sokoto to Maiduguri.

The question is why would Akon visit our Minister of Environment at this time? His popular Akon Lighting Africa project is not about the GGW.

The answer is not far from the dynamic that inspired Samantha Power’s visit to Nigeria. She said it herself. While on a visit to Yola, Ms Power was unequivocal in stating that the US did not view the past administration of former President Goodluck Jonathan transparent and serious enough to command its attention, especially as regards the fight against Boko Haram. But now they find in President Muhammadu Buhari’s administration the ingredients that make a worthy-to-be-helped developing country. In other words, Nigeria is now qualified for sincere global interventions.

Akon’s body language is clearly telegraphing the same message his country has officially dropped. The musician, known for his “green passion” for Africa, is undoubtedly looking towards stringing one or two green projects in Nigeria. Albeit known for renewable energy projects, it seems the GGW is now on the card.

The Great Green Wall, Africa’s proposed 4,300-mile wall of trees, is designed to stop encroaching desertification. Roughly 40 per cent of Africa is now affected by desertification and because of this threat, experts are of the view that about two-thirds of Africa’s arable land could be lost by 2025!

In Nigeria, as noted earlier, the programme was initiated across 11 frontline states – Kebbi, Zamfara, Gombe, Yobe, Jigawa, Adamawa, Bauchi, Katsina, Borno, Sokoto and Kano. Interestingly, the areas it spans constitute about 43 per cent of Nigeria’s land mass as these areas are also where most of Nigeria’s food produce come from. While it affects 200 communities, the GGW project directly touches the lives of 43 million Nigerians.

Akon’s green passion is quite admirable. He understands the issues and has obviously done his homework to know that his home country is really a case study in climate change vulnerability.

Just check out the vivid picture. Senegal’s capital, Dakar, sticks outside of the Atlantic Ocean on a peninsula. It is at least one thousand miles from the Sahara Desert, yet the air today is so thick with sand that tops of buildings disappear in a sandy haze. So, even a blind man could see the impact of environmental hazard on the country; and the informed knows that the first defence line is tree planting.

Then, Akon ostensibly knows that Nigeria, being a key player in the region must play a formidable role, even if not a leading one. Ours is a country that has the widest flank in the Sahel corridors and with the highest population figure and deepest pockets (of course). However, corruption and weak political will pummelled successive administrations to the back seat of the GGW Africa train. But now, the apparent audacity of the present administration is prodding various green players to prop us back to our destined front coach.

It is just as well that the GGW in Nigeria is attracting attention at this moment. I believe I was not the only one that was wondering what the GGW had achieved with the money it received when under the former administration the Presidency released N16billion for early takeoff of the project.

According to a Leadership newspaper report of September 12, 2014, the release of the money was confirmed in a letter dated August 15, 2014 by the Minister of Environment, Mrs Lawrencia Laraba Mallam, to President Goodluck Jonathan, through Vice President Namadi Sambo.

I believe the platform that will ensure that Akon is not disappointed has already been set. It is called Follow The Money.

Follow The Money, an initiative of Connected Development (a nongovernmental organization), advocates, tracks, and visualises funds meant for local communities. The FTM team is made up of researchers, data analysts, activists, campaigners, journalists, lawyers, activists, information managers, students, and academia and development consultants.

It was the platform that dealt the blow which knocked down the questionable N9.2 billion clean cook stoves contract during the past administration.

In a milestone initiative it introduced last month, Follow The Money launched a project to track the funds allocated for the implementation of the GGW in Nigeria, with a data based tool designed to inform policy decisions while capturing voices from the beneficiaries in rural communities in the 11 northern states. It organised the first ever stakeholders’ meeting on the implementation of the GGW project, where CODE launched a geo-reference tracking system to foster the completion and sustainability of the project.

The novelty of the meeting is that it brought together critical stakeholders on the project. The Director General of the National Agency of the Great Green Wall was present, and in his remarks, emphasised that his agency believed in working with NGOs and also understands the work of NGOs in nation building.

There were also representatives from the office of Chief of Defence Staff, and the Federal Ministry of Water Resources, among others.

Hamzat Lawal, The Chief Executive of CODE at the roundtable, noted that such initiatives existed to improve communities just as it raises the questions of how MDAs access funds, use these funds and how their impact are measured. He further added that stakeholders present should take ownership of the tracking tool provided via the GGW tracker (www.followthemoneyng.org/ggw <http://www.followthemoneyng.org/ggw>) and asked that more debates be made on ensuring that the Ecological Fund Office releases 15 per cent of its funds as stipulated to the GGW.

“In the following months, we will be taking our stakeholders and town hall meetings to Jigawa, Kano and Kebbi states to further engage the state governments and the locals directly affected by the implementation of the Great Green Wall project. For us at CODE, what we try to do is ignite debate, informed debate between the government and the citizen and today has showcased our vision. But again moving forward we will take this to the state level because we believe that state and community ownership is key.

“We are going to have town hall meetings where we shall speak their native languages so that they will understand the message and run with it. In the long run, we want to see more transparency and accountability. We want to see the citizens having more confidence in government interventions, and see themselves adding their voices to how government works and functions,” Lawal said.

If Follow The Money could succeed in leading the campaign that unveiled the shenanigans that characterised the clean cook stove project, there is no doubt that it will have a resounding success under the present government.

The gains that will spiral out of the potential triumph can only be imagined. But most remarkably, it will be enough to give Akon the fillip needed to factor Nigeria into his plans of greening his motherland, Africa. And in this way inspire Nigerian entertainers not only to go green, but as role models, to point the country’s citizens towards sustainable lifestyle and environmental stewardship.