Deforestation and its Devastating Effects on Eco-system 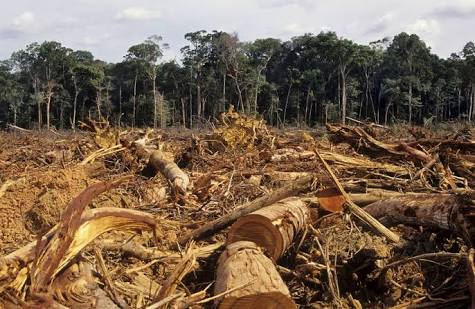 Deforestation is the permanent destruction of forests in order to make the land available for other uses. An estimated 18 million acres (7.3 million hectares) of forest — roughly the size of Panama — are lost each year, according to the United Nations’ Food and Agriculture Organization (FAO).
Deforestation is considered to be one of the contributing factors to global climate change. Trees absorb greenhouse gases and carbon emissions. They produce oxygen and perpetuate the water cycle by releasing water vapor into the atmosphere. Without trees, forest lands can quickly become barren land.
Location
Deforestation occurs around the world, though tropical rainforests are particularly targeted. Countries with significant deforestation currently or in the recent past include Brazil, Indonesia, Thailand, the Democratic Republic of Congo and other parts of Africa, and parts of Eastern Europe, according to GRID-Arendal, a United Nations Environment Program collaborating center.
Though deforestation has increased rapidly in the last 50 years, it has been practiced throughout history. For example, since 1600, 90 percent of continental United States’ indigenous forest has been removed. The World Resources Institute estimates that most of the world’s remaining indigenous forest — about 22 percent of its original amount — is located in Canada, Alaska, Russia, and the Northwestern Amazon basin. The Amazon is a highly targeted area of recent deforestation.
Causes of deforestation
Deforestation is typically done to make more land available for housing and urbanization, timber, large scale cash crops such as soy and palm oil, and cattle ranching. The World Wildlife Fund reports that much of the logging industry that contributes to deforestation is done illegally (about half of it used for firewood).
Common methods of deforestation are burning trees and clear cutting, which is the controversial practice of complete removal of a given tract of forest. A forestry expert quoted by the Natural Resources Defense Council describes clear cutting as “an ecological trauma that has no precedent in nature except for a major volcanic eruption.”
Burning can be done quickly, in vast swaths of land for plantation use, or more slowly with the slash-and-burn technique. This destructive practice entails cutting down a patch of trees, burning them, and growing crops on the land until the soil becomes too degraded from overgrazing and sun exposure for new growth. Then, the farmers move on to a new patch of land.
elephants, sumatran elephants, endangered elephants, elephants close to extinction, extinct elephants, endangered species, endangered species news, deforestation in sumatra, pulp and paper companies and deforestation, palm oil companies and deforestation
Effects of deforestation
Forests are complex ecosystems that are important to the carbon and water cycles that sustain life on earth. When they are degraded, it can set off a devastating chain of events both locally and around the world.
Loss of Species: Seventy percent of the world’s plants and animals live in forests and are losing their habitats to deforestation. Loss of habitat can lead to species extinction. This is not only a biodiversity tragedy but also has negative consequences for medicinal research and local populations who rely on the animals and plants in the forests for hunting and medicine.
Carbon Emissions: Healthy forests help absorb greenhouse gasses and carbon emissions that are caused by human civilization and contribute to global climate change. Without trees, more carbon and greenhouse gasses enter the atmosphere. To make matters worse, trees actually become carbon sources when they are cut, burned, or otherwise removed. “Tropical forests hold more than 210 gigatons of carbon, and deforestation represents around 15 percent of greenhouse gas emissions,” according to the WWF.
Water Cycle: Trees play an important part in the water cycle, grounding the water in their roots and releasing it into the atmosphere. In the Amazon, more than half the water in the ecosystem is held within the plants. Without the plants, the climate may become dryer.
Soil Erosion: Without tree roots to anchor the soil and with increased exposure to sun, the soil can dry out, leading to problems like increased flooding and inability to farm. The WWF states that scientists estimate that a third of the world’s arable land has been lost to deforestation since 1960. Cash crops planted after clear cutting or burning — like soy, coffee, and palm oil — can actually exacerbate soil erosion because their roots cannot hold onto the soil the way trees’ can.
Life Quality: Soil erosion can also lead to silt entering the lakes, streams, and other water sources. This can decrease local water quality, contributing to poor health in the local population.
All of these factors can have adverse effects on local economies. Increased flooding, lack of quality water, and inability to produce their own food causes many locals migrate to cities that lack infrastructure for them. Or, they work on plantations, worsening the deforestation problem and at times being subjected to inhumane working conditions.