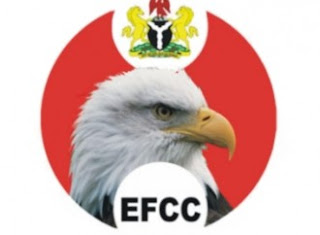 Justice Mohammed Yunusa of the Federal High court sitting in Lagos, has ordered the Economic and Financial Crimes Commission (EFCC) to maintain status quo and desist from arresting the Managing Director of Carlisle Properties, Mr. Kennedy Izuagbe.
Izuagbe, a former director of Societe Generale Bank Nigeria Plc, was alleged to be an associate of the senate president, Bukola Saraki, was recently declared wanted by the anti-graft agency over a case of conspiracy and money laundering to the tune of over N3.6 billion.
Apart from stopping the arrest of Izuagbe, the court also put an hold the arrest of shareholders and staff of Carlisle Properties, believed to be owned by Saraki.
Izuagbe, in an ex parte motion filed before the court prayed the court to stop the EFCC from arresting him as well as its director of operation, Olaolu Adegbite, from further unlawful harassment and intimidation of the applicants by agents of the commission.‎The applicants counsel, Efot Okoi arguing the motion on behalf of Izuagbe and Carlisle Properties, said the intimidation of Izuagbe as Managing Director of Carlisle Properties and Investment Limited is unconstitutional, illegal, null and void as well as a gross violation of his fundamental right as provided under sections 34, 35 and 37 under the 1999 constitution of the Federal Republic of Nigeria.
Okoi argued further that until the hearing/determination of the motion on notice, the EFCC and its agents should be restrained from intimidating Izuagbe and Carlisle Properties, as well as carrying out any further unlawful arrest and detention of the applicants, their agents and associates.
Okoi also prayed for an order setting aside the letter of invitation from EFCC to Izuagbe and Carlisle Properties pending the hearing and final determination of the substantive suit before the court, adding that Izuagbe was only head of Internal Control at the SGBN and was never directly involved in loan approval.
The trial judge, Justice Yunusa in his ruling ordered that the EFCC maintains status quo and that they should be served with the processes and order of the court.
The judge also ordered the EFCC to show cause why they should not be restrained from arraigning Izuagbe and adjourned to October 12.